The sage wisdom is that “it’s the journey not the destination,” but we often find ourselves focused on the end-point of planning for where we want to be, instead of enjoying and relaxing in the getting there. It’s on a train to Union Station in Washington D.C. that I find myself reminded of this.

At 10:30 this morning, we arrived at Union Station in Raleigh to board the Carolinian for a 6 hour ride through the countryside of North Carolina and Virginia. The first leg was marked by stops in small towns on the outskirts of the city: Garner, Wilson, and Rocky Mount. The wax and wane of each economy was evident from the train window. Revitalized downtowns or empty store fronts. Swept sidewalks or broken benches. Transformed historic treasures or overgrown kudzu.

Both sides of the track in Wilson, North Carolina

The chug-chug-chug of the train took us past wide leg rivers and red petal fields. Once we reached Richmond around 2:30 in the afternoon, activity picked up. Warehouses, crates, stores, and homes crowded the railroad on both sides. Inside the train, the conductor and passengers began chattered plans of arrival. Our train car, which had been fairly empty compared to the others we passed through on the way to the snack car, was full by the time we departed roughly 15 minutes later.

The snack car was three or four cars away. I got a Turkey and Gouda wrap + a Ginger Ale. They were serving pre-packaged foods: a couple sandwiches, some pastries, chips and other snacks, sodas, coffee, tea, beer, and wine. We had brought along a few snacks and drinks in our bags too for good measure. Back at our coach-class car, the seats were paired on each side, plush, and wide. And, they gave a deep lean back! I lounged while reading, writing, and watching the world go by. 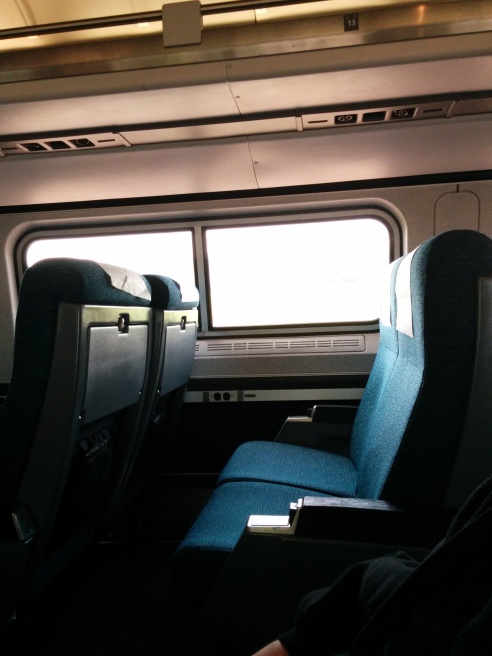 Six hours of travel is usually right on the brink of what I can bare. On a plane or in a car. I’ve done much longer trips, like the handful of 10+ hour trips to NYC and a 22 hour plane ride to Thailand! Yet, by train, six hours felt luxurious. Almost not long enough.

Travel by train (Amtrak in this case) is part of the adventure. You just get on and ride. Beyond what I got to see of the land, I was able to relax more quickly. Vacation-time was wound up tightly with travel-time, and I had stopped thinking of getting there long before we had arrived. Tomorrow’s forecast says sunny and beautiful in D.C. We’ll brunch, hike, see a game, eat at a nice place, then head back by train on Sunday.

Hawk-watching in downtown Raleigh begins in early April, but now that winter seems finally behind us this year, prime watching-weather is in full effect. It’s spring and the so aptly named Red-tailed Hawks are hunting rodents, raising their young, and soaring around—particularly the Capitol building. Get the full schedule through May 22 here.

JP’s site chronicles his watches. I love this one on “Papa’s” superman (flying) mode!

I hope to make it to one of these events. More importantly I have questions! Like:

Have you been on a hawk watch tour? I’d love to hear more about it if you’d like to share in the comments. Thanks!